Republicans on defense for wanting to ban abortion with no exceptions 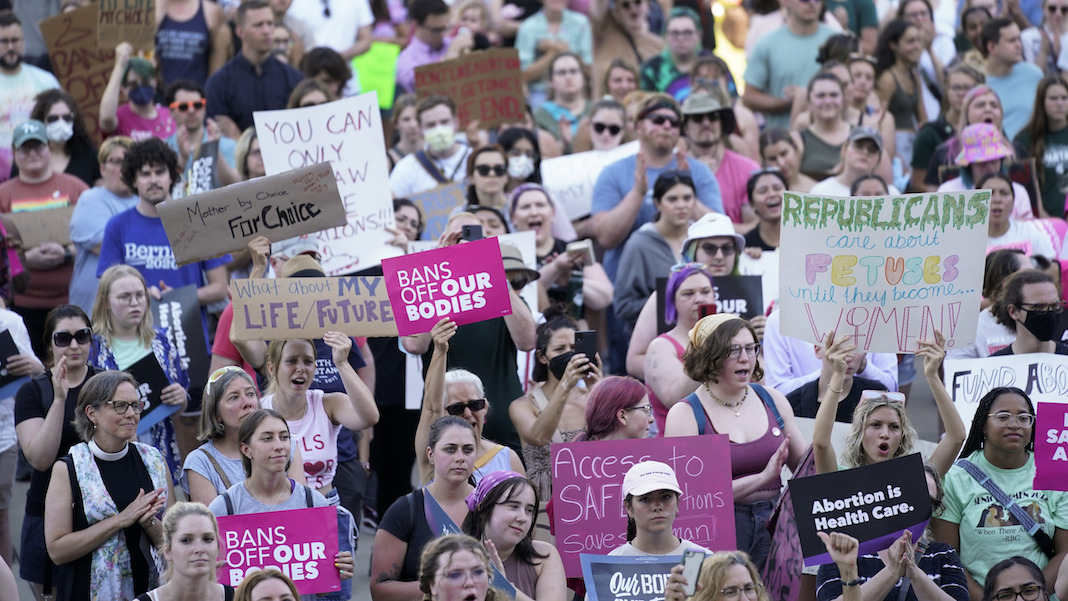 GOP nominees in key races across the country are facing new ads about their desire to ban abortion with no exceptions for rape, incest, or risk to pregnant people.

With the general election now underway in Arizona and Michigan following Tuesday’s primaries, the Republican nominees in a handful of critical races are being hit with new ads that point out their anti-abortion beliefs.

The television spots target two newly minted Republican nominees: Tudor Dixon, who is running to be Michigan’s governor, and Blake Masters, who is running for U.S. Senate in Arizona. The ads point out that the candidates want to ban abortion outright, even in the case of rape, incest, and if the life of the pregnant person is at risk.

In Michigan, a group called “Put Michigan First” is running an ad that uses clips of Dixon espousing her anti-abortion views that the group says are “not acceptable for Michigan.”

In one clip, an interviewer asks Dixon, “Are you for the exceptions for rape and incest?” To which Dixon responds, “I am not.”

And in a second clip, another interviewer trying to suss out Dixon’s position on abortion asks, “No exceptions for rape or incest, or what about health of the mother?” To which Dixon replies, “No exceptions.”

Yet another ad from Senate Majority PAC, a super PAC that seeks to elect Democrats to the Senate, slammed Masters’ views on abortion.

It features a woman identified as Brianna who had an emergency abortion to treat an ectopic pregnancy, a life-threatening condition in which the fertilized embryo implants outside of the uterus and for which the only treatment is an abortion. In the ad, Brianna says the procedure saved her life.

“If I didn’t make it into the OR within a couple of minutes, I was gonna bleed out and die,” Brianna said in the spot. “But according to Blake Masters, that’s just too bad. He wants to ban all abortions, even in cases of rape, incest, and the life of the mother.”

The ad then features images of Brianna’s three other children, with Brianna saying, “Masters claims he supports women and families. But if I didn’t have the right to abort the pregnancy, my three children can be left out on their own. Masters is so extreme and so wrong for Arizona.”

Meanwhile, in Arizona’s competitive governor’s race, Democratic nominee and Arizona Secretary of State Katie Hobbs released her first general election ad in which she promises “to protect a woman’s right to choose.”

Other Democratic candidates have already been airing ads attacking their opponents for their anti-abortion stance.

The ad starts with a narrator saying Mastriano “wants to outlaw and criminalize all abortions.”

It then features a clip of Mastriano saying, “‘My body, my choice’ is ridiculous nonsense,” and that “I don’t give a way for exceptions either.”

The ad also notes that Mastriano has called climate change “fake science” and said that same-sex marriage should “absolutely not” be legal.

Abortion has become a major issue in the upcoming midterm elections after the U.S. Supreme Court overturned Roe v. Wade, the landmark 1973 case that established the longstanding precedent guaranteeing Americans’ constitutional right to an abortion.

In a political environment that would otherwise favor Republicans, many Democrats see the Supreme Court’s action to restrict abortion rights as a motivating factor ahead of the November midterm elections. The first major test case for that idea came on Tuesday when voters in Kansas overwhelmingly defeated an anti-abortion constitutional amendment, with turnout surging to levels experts said were unheard of for a late-summer primary.

In the wake of the Kansas vote, some Democrats felt vindicated in their belief that abortion rights could energize Democratic voters and turn independents and even Republicans against the extreme GOP nominees.

“The question is: will this motivate people who weren’t going to vote. The answer from [Kansas] is a resounding yes,” Christina Reynolds, the vice president of communication at EMILY’s List, tweeted. “Those numbers, in a MIDTERM PRIMARY, are bananas. They show that people will vote for their rights. And given how much lower midterm turnout is, that can be a game changer.”

Secretary of State Jocelyn Benson: ‘Michiganders can be confident their voice will be heard’